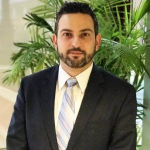 An interview with Attorney David Treyster was recently conducted in the closed Facebook group of Rubic.us. This is the attorney’s second interview. You can watch the first one here.

David is from Chernivtsi, Ukraine. He moved to the USA with his family at the age of nine and lived in Brooklyn, NY. He earned his law degree from New York Law School in 2003. For the next 10 years, David worked for the law firm of Paul Weiss. In 2013 he established Hudson Law Group, with offices in New York and New Jersey. The attorney’s practice extends to Immigration, Court Cases, Contracts, Divorce, and Real Estate.

We lived in the US on an F-1 visa and had a child in the US, who was enrolled in Medicaid. We were granted a Green Card, but we are now afraid that our Green Card could be denied because of Medicaid.

If you and your spouse did not receive Welfare or Food Stamps, there should be no problem. Your child is a US citizen, and therefore entitled to Medicaid, which does not affect you or your spouse.

There was a two-month interval between my husband’s first marriage and our current marriage. Will this present any problems with the Immigration Service?

There should not be any problems. The Immigration Service has no interest in moral issues. They will ask you about your marriage, but if you can prove your marriage is legitimate and genuine, everything should be all right.

My 68-year-old uncle has attempted and failed to pass his citizenship exam twice. His English is very poor. What options does he have for obtaining citizenship? He cannot seem to learn the English language.

There is a test exemption allowed on medical grounds such as old age or memory loss. It is called the Medical Disability exemption. However, you will have to provide documentation from his doctors that he is eligible.

What are the consequences of a month’s delay in sending documents for removal of conditions on a Marriage Green Card?

According to the rules, when a conditional green card expires, it cannot be renewed, so you will need to apply for it again. The Immigration Service allows for an application delay if there is "good cause." If you have already applied for a Green Card, write a letter, that explains the reason for the delay, and be sure to annex to your case.

What are the statistics on the percentage of refusals versus successful granting of asylum in the United States?

Everything can be found here.

How do I explain a prior criminal record when applying for US citizenship?

If you have been arrested elsewhere in the world, you need to provide a copy of the arrest record. If you were arrested in the place where you currently reside, it is easy to get criminal records from a local law enforcement agency. A copy of any certificate of criminal record must be Court Certified, which means the copy must be given an official court stamp.